A REST listener consumes a HTTP-REST request and offers its content as a ConnectMessage.

This listener is a request/response consumer, which means that a response must be returned. In addition this consumer can handle REST URL type requests.

When a Message reply component is configured at the end of the flow, the result from the service is sent back to the HTTP invoker.

Also, thrown exceptions will be sent back to the HTTP invoker, instead of being caught by the connect exception handling mechanism.

An equivalent example of an OpenAPI style REST pattern is /context/path/user/{user}/order. The OpenAPI style option requires you to specify the query variables you want to map in a separate attribute mapped-query-params (only visible if OpenAPI is enabled). So assuming we've set this attribute to the value "id" and a request is made with the request URL /context/path/user/john/order&id=42, the resulting ConnectMessage will have properties "user" and "id" with values "john" and "42" respectively.

In both styles it is possible to add wildcards to the patterns, for example we can have the OpenAPI style pattern /context/path/user/*/{order}/*/date. The "*" elements will match exactly one path element.

The REST Listener supports security through OAuth 2.0 or OpenID Connect (OIDC). The setup requires either an issuer URI or a JSON Web Key Set (JWKS) URI. In the case of an issuer URI, the REST Listener will use this URI to look up the metadata of the authorization server. This requires that the authorization server is either an OIDC server or implements an OAuth2 metadata endpoint as outlined in RFC8414, section 3.

The JSON Web Token (JWT) claim expression can be used to either allow or deny requests based on the claims inside a JWT token.

A JWT is a base64-encoded structure consisting of three parts; a header, a payload and a signature. The payload is a JSON object containing a number of key/value pairs called "claims". These claims are added by the OAuth2/OIDC server and might have domain specific information. One can examine JWTs using the site https://jwt.io/.

The JWT claim expression can assert if claims should or should not be present in an access token. For example, given the following claim section in a JWT:

First note that the claim section is a JSON object, and the values of its claims can in turn be JSON objects, arrays, strings, numbers or booleans.

(1) We only accept a JWT if the string-claim has value string-value: The JWT claim expression would be '"string-claim"."string-value"'. Note the usage of single and double quotes.

(2) We only accept a JWT if the string-claim does have value string-value. The corresponding JWT claim expression would be ['not', '"string-claim"."string-value"'].

(4) We only accept a JWT if the array-claim contains value value2 or if the object-claim has a field name with value foobar, or if the boolean-claim has value false. The corresponding JWT claim expression would be ['or', '"array-claim"."value2"', '"object-claim"."name"."foobar"', '"boolean-claim".false'].

So, there are three operators, and, or and not. and and or can have two or more arguments. not always has one argument. Claim values are defined via '<claim-name>.<value1>.<value2>.etc' syntax. 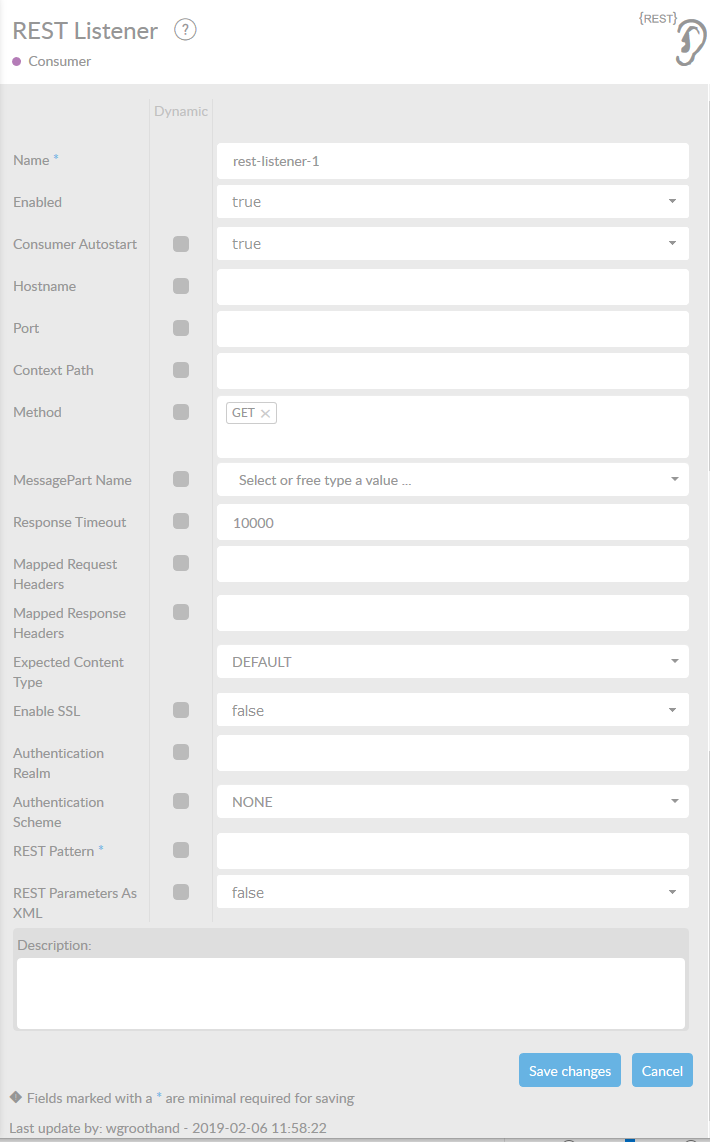 In the table below, you will find an explanation of these properties. All attributes with a ‘*’ are mandatory.

When you enable SSL, you need to add some extra information. This will look like this:

Let us know what you think

Let us know what you think

This page is great!
I have a suggestion
I found a problem
I found a typo

Cookies are small text files that are stored by your browser. This website uses cookies to improve the user experience and to offer extra functionality such as remembering your login and integration with social media such as Facebook and Twitter. The cookies only contain anonymized information, so your name or email address will not be stored.

This website uses cookies to improve the website, to adjust advertisements to your interests and to enable integration with social media. If you do not wish to receive cookies, you can adjust your settings.